This was tested on CentOS 5.6 on a fresh MediaTemple (dv) setup. I figure it should be the same for any CentOS install. This set of instructions is a result of hours spent on installation troubleshooting; google searches; and trial and errors. Hopefully this can help other people.

To integrate libraries using namespaces into a Yii Framework project, you can simply use Yii::setPathOfAlias to have the classes autoloaded by Yii when needed. Just specify the root namespace as the alias and the physical location of that root alias as the path.

Using Predis as an example, if we put the code in:

We’ll add it to Yii as an alias named Predis so classes under it can be autoloaded:

Now when we call new Predis\Client(), Yii will look for a file named Client.php in /vendors/predis/lib/Predis. The same holds true for other classes under subfolders (e.g. Predis\Commands\Append).

This is a pattern we’ve been using to organize a big jQuery project that is now composed of 150+ files. When we first started with the project, we kept all page components in their respective jQuery plugins. This was good enough at that time. But as the project grew it became harder and harder to maintain it.

What we did to solve it was go back to basics: use plain JavaScript objects instead of plugins and group them using namespaces.

Yeah, so I’ve been learning Core Data and I keep getting this error during a fetch request:

An obscure error message, yay! This happened when I used this very simple predicate declaration:

Like one of those bad days, Google doesn’t help. It took me an hour or two to figure out that size is a reserved word in Core Data. Epic fail. You can fix this by escaping size using a hash (#): 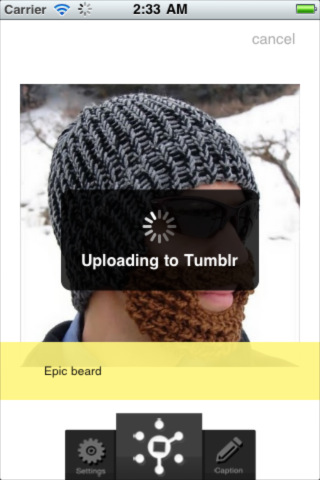 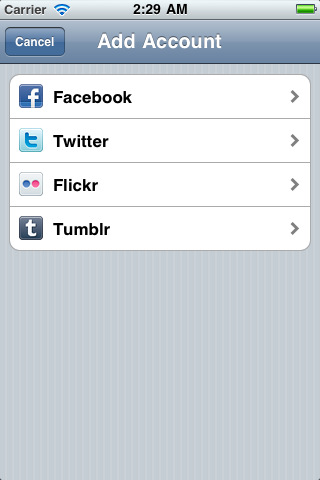 PicPing is an iPhone app we just released as part of the Globe MobApp Hunt. It allows you to connect your Facebook, Twitter, Flickr, and Tumblr accounts. You can then take photos and upload it to all your accounts in one go. It is now available for download on the App Store.

I made this using Cocoa Touch / Objective-C. Of all the available social networks, the easiest to integrate was Facebook because of their iOS SDK. The examples were really easy to follow. Tumblr comes next because of their very simple API. I used ASIHTTPRequest for communicating with it. Flickr integration was also a little easier because of ObjectiveFlickr.

Unexpectedly, I spent the longest time with Twitter. There were so many available iOS libraries for Twitter that I couldn’t figure out what to use. And I found most of them to be really hard to understand and start working with. I ended up with this library by Ben Gottlieb for authentication and Twitter posting. I used PlainOAuth and ASIHTTPRequest for communicating with TwitPic. It was a mess but I didn’t have enough time to clean them all up.

To summarize, I wouldn’t have finished all these integrations if it wasn’t for all the awesome open-source libraries. Thanks to all the authors!

To celebrate the New Year, I played a little with Ruby. I made this small Ruby script to download all original image files of PicLyf stored in Amazon S3:

This is just a quick tip on editing the hosts file on Windows 7. Normally, administrator privileges is required to edit the hosts file. I found that the quickest way to do this is:

Done! You can also use the Ctrl+Shift+Enter trick for other apps that need to be launched as admin.

Instantiated windows and controls in Titanium Appcelerator act like JavaScript objects. JavaScript allows you to create custom properties in objects even when that property is not defined. You can take advantage of this in Titanium to pass some information to a window that you are about to open. 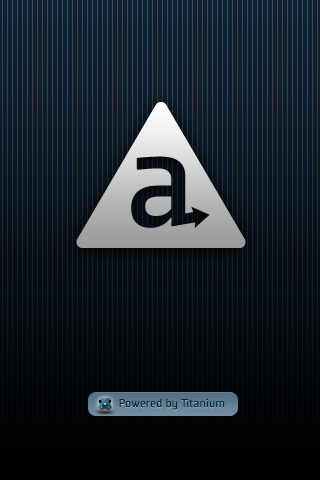 I’m using Appcelerator Titanium Mobile for both the iPhone and Android version. Titanium allows you to build native applications for these platforms using only JavaScript. It is a good tool for those who want to build native apps but don’t want to use Obj-C or Java. And I thought that it would allow us to quickly build our application for both platforms. It wasn’t as quick as I thought. Like every tool, there are some parts of it that will slap you in the face.

Adding a MovieClip/Sprite from an external SWF to a skin

I’m trying to learn a little bit of Flex 4 development. I’ve done a lot of Flash/AS3 since more than a year now but I haven’t really gotten into Flex yet. From what I learned in a day, they did a lot of improvements in separating the logic from the presentation (design). Most of this is done through skins (i.e. separate mxml files defining how a control will look). Skins act just like a container; it can contain shapes and additional controls. If applied to a control, that control will inherit all the shapes and controls from that skin.